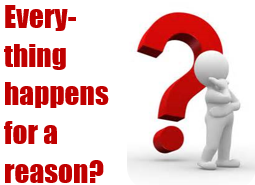 Everything happens for a reason?

Can you imagine that there may have been a purpose behind you and me having a “chance” meeting today? There are many things in life that just seem to happen, only for us to find later that they were a little part of a much bigger picture!

Some people may call these happenings a coincidence. A friend of mine calls them “God Winks,” when something happens and you just kind of know God just winked at you. I believe we met today so I could share an important message with you.

God created us for a relationship. He deeply desires to have a relationship with you and me. He looked down upon man and desired a heartfelt response. That response is of our own choosing. Yes, He cares for us so much that He took the first step toward us when we couldn’t have cared less.

So God decided to do something about that.

In His goodness and kindness He sent His only Son here to live as a man. He struggled with temptations; He had difficulties with people, and experienced pain and loss just as we do. Yet, He was able to do something that you and I could never accomplish. He lived a perfectly sinless life. Can you imagine living a life without any sin on your part?

What does God want from me then? Most important of all, He wants a response. Just take a step toward God.

This includes an admission that we need Him and cannot do it on our own. I do not know about you, but I tried to live life on my own terms long enough to be miserable. I realized I wasn’t very good at it!

“I had to admit that I needed God and could not make it on my own.“

Then He wants us to recognize that we are responsible for the separation between us.

An open and honest confession that we have betrayed God and that we are responsible for the distance between us is crucial. I had to accept my own responsibility.

After that, we have to trust in Him to keep His promise.

Then we are ready to ask Him to do what only He can do. That is to change us from the inside out. We ask Him to come into our lives and have a relationship together. Now there is a sense of peace between us. We can start this new relationship that didn’t exist before. Jesus said,

Here I am! I stand at the door and knock. If anyone hears my voice and opens the door,  I will come in...  Revelation 3:20

Three Crosses. Envision this, as Jesus was hanging on the cross there were two thieves on either side of him as well. One of the two thieves looked at Jesus demanding if He really was the Son of God, He should get down from the cross and take him down too! The other thief spoke back to his friend and explained that they (the two thieves) deserved their punishment, but Jesus had done nothing deserving death.

Then he looked at Jesus with a simple request. He asked, “Would you remember me when you come into your kingdom?”

If there ever was a time in history that God could tell us how we could get to heaven with Him forever this was it.

Jesus’ answer would be decisive. This is the teachable moment for all mankind! Would Jesus tell him to go to church? To give money to the poor? Or do good deeds?

He answered back, “Today you will be with me in Paradise.”

What had this thief done that deserved him getting into heaven forever? NOTHING! The ONLY thing he could do, hanging there on the cross was to recognize his situation (repent), “I deserve to be here…” and then place his faith, his trust in Christ (believe), “remember me when you come into your kingdom.”  Luke 23:42

How about you? Are you ready to trust Christ to change you from the inside out? Does everything really happen for a reason? You bet it does! This little brochure is God’s message to you because He cares about you! Will you give Jesus your life today?


10% of all church donations go to missions and community outreach.

The Iron Horse Fellowship helps those who are in need.